Scrum epitomises efficiency and productivity. If you want to boost programmer productivity and make programmers happy, all you have to do is to follow this one tip.  You probably won’t like it. But it works. Try it and watch productivity soar. 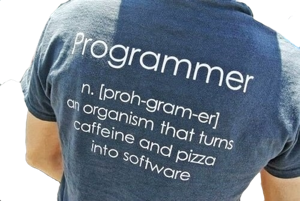 Some years ago, I was looking around a company’s offices with their Software Development Manager. On our way round, he pointed to a huge open plan area and proudly announced “It took me ages but I finally got the development team into the main work office”. He was pleased and I was bewildered.

I looked around this large communal space and a cacophony of sound assaulted my ears. Technical support staff shouted questions to colleagues and programmers. Some support staff were on the phone trying to answer questions and generally make themselves heard. Sales staff competed valiantly in the volume. Marketing staff pitched ideas at each other in strident tones. To some, like the software development manager, this was the epitome of a busy, engaged environment. Everyone pulling together in a common cause. To me, this was bedlam.

The story is a common one. I’ve worked in many environments where there are large open plan offices all provided in the name of efficiency. Advocates of open-plan offices talk of improved communications. Better communication is definitely good but there are limits. Here are two examples to highlight what I mean.

In both circumstances, you’re communicating when something else interrupts you and wants to communicate as well. How do you address the annoying child or persistently ringing phone? However you deal with it, they’ve interrupted your prime communication. Not all communication is good.

Programmer productivity in an office

Much respected blogger Joel Spolsky has written on the subject of programmers being ‘in the zone’. It’s a great read and if you want to know how to get the best from your software developers, do take a look. Here’s an excerpt:

We all know that knowledge workers work best by getting into “flow”, also known as being “in the zone”, where they are fully concentrated on their work and fully tuned out of their environment. They lose track of time and produce great stuff through absolute concentration. This is when they get all of their productive work done. Writers, programmers, scientists, and even basketball players will tell you about being in the zone.

We’re back to that communication thing again. Bad communication knocks a programmer out of the zone. The knock-on effect is reduced productivity. Joel knows what he’s talking about when it comes to programmer workspace. He’s also put his money where his mouth is when it came time to relocate and refit his offices.

Frankly, I believe that open plan offices have everything to do with financial efficiency and little to do with productive efficiency But advocates of open plan offices remain. Take the company I visited. Their software development manager was delighted that the developers were in the main open office. His reasons? Because now they were visible and the support team had direct access to the developers. He saw these as good things that trumped programmer productivity.

But for me (and Joel), as far as software developers go, open plan is one of the quickest ways to reduce their productivity. Knowledge workers, like programmers, need space, peace and quiet to think and get ‘in the zone’.  So, to boost programmer productivity, give them an office with peace and quiet.

One final thought. When I visited the company mentioned in this article, it was easy to spot the programmers. They were wearing headsets. They’re not doing this to ignore people, or to skive off and listen to music. They’re trying to zone out the noisy environment so that they can think and get their job done.

What are your thoughts? I’d love to hear them. Leave me a comment below.